GHHF Activities participated and/or organized from November 10 thru December, 2019 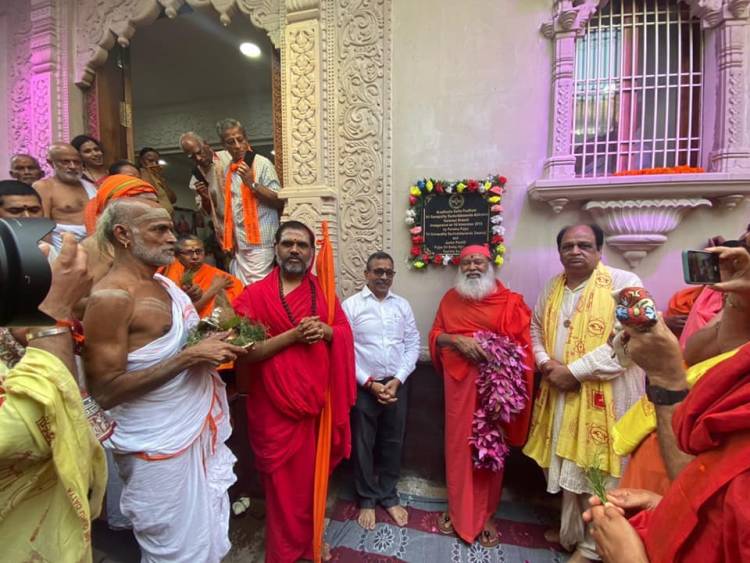 We request you to donate by the end of this year to continue our efforts in India. Please send your donations to:

Sri Swamiji performed Sri Chakra Puja as Kalasa sthapana was taking place at Chet Singh Palace in Varanasi.  More than hundred priests participated in Ati Rudra Yagam. Eleven Homa Gundas were built for the purpose. More than 4000 devotees attended the program. Sri Swamiji spoke about the significance and importance of Kasi and how Kasi has been described as the center of the universe as per our scriptures.

It was brought to our attention about the sale of Temple lands of Dwaraka Temple. I talked to Sri Sudhakar Garu, Chairman of Dwaraka Tirumala Temple. I have known him for few years. He agreed to stop the auction. We will be meeting with him in few days to talk about issues.

The announcement to sell the land is related to a small piece of land in the middle of Eluru. It is a housing site. He said it is costing more money to protect it than the value of the land.

Anyway, the sale is stopped and we will meet and discuss the future course of action along with other related issues.

Good news - AP high court taken up the PIL filed by Sudhish on the honorarium to the Muslim mullah and Christian pastors, the Government was planning to give. With this PIL, the High Court asked government explain as to why they should be paid. Government is given nearly five weeks time to respond. Case is scheduled for December 30.

Let us pray that the court will make the right decision

Christianization started in TTD with the publication of Panchangam. It says Sri Yesaiah Sri Venkatesaya Namaha

In TTD, other faiths are allowed to willfully tarnish the image of Hinduism. Vigilance officer accepted the fact that in TTD website Christian prayer is found. They took immediate action.

Let us see if they will investigate and reveal the names of other faith people and take appropriate action against all non-Hindus from TTD.

An article was published in Deccan Chronicle today on December 1, 2019.

We had a long meeting with Dr. K. Haranath Reddy, Director of SV Gosamrakshana Shala. I gifted my book “Reviving Hinduism” which contains two articles on Gomati.

On December 1, we were informed that church is being built within 15 feet from a Devi Temple in Pulittavari palle village about 20 kilometers from Tirupati. We went to the village and saw a Cross on top of a building. Villagers were told that it was a house. All of a sudden Christian Cross popped on Nov 30.

When we went to the village, they were upset and asked for our help to submit a petition to different officials including the collector-to remove the structure. As per IPC 153 and 154, no activity should be undertaken to disturb the peace and harmony in the community.

Also, as per G O Ms number 376 dated November 29, 2012, no minority religious structures could be built near a temple without the permission of the District Collector. They can be removed if they are built without permission.

We went on December 3 and met with villagers who signed the petition to remove the church. We encouraged them to do bhajans every day and gifted the Sound system on behalf of Global Hindu Heritage Foundation/ Savetemples. They agreed to play religious songs every day and do bhajans.

The signed petitions will be submitted to Collector and other officials on December 4.
Let us hope they will heed the villagers’ request,

UPDADATE on Petition to Remove Church

As you all know that GHHF/ Savetemples organized a Petition drive to remove Church building which is only 20 feet away from Devi Temple in a village.

We are very happy to report that the Pastor approached the villagers and begging them not to submit the Petition.

He already removed the cross and said that he will use the building as a house. We are not sure how far he will keep his word. We are going to submit irrespective of his promises. Here I am posting the Church building where he removed the cross.

Few other villages are approaching us to help them. We will be visiting these villages soon.

On December 5, Savetemples organization arranged a meeting to discuss the arrangements and program of Dr Swamy scheduled for December 29, in Tirupati.
He along with Swami Paripoornananda will be the main speakers. They will address issues affecting Hindus and Ayodhya Verdict.

What are the plans to recover Krishna janmasthala, Kasi Viswanatha temple and Taj Mahal?

Dr. Sundera Murty, Sri Subramanya Yadav and me spoke about the arrangements. More than 65 people attended the planning meeting. We are expecting at least 1500 people to attend the program.

Now they will soon work on the sides of the temple. It appears it may be completed very soon.

Finally TTD agreed to take up Vakula Mata temple. As there are pictures of Vakuka Mata, GHHF came up with the picture which was agreed to sculpture the image as per the sketch.

CM Jagan Party colors are painted all over in Andhra Pradesh

Party colors are painted on Village Panchayat Buildings, water tanks, electrical polls, some schools, funeral places and even garbage bins on the roads. To our knowledge nothing like this happened before.

We all believe that the panchayat buildings are not the property of any given party, whether it is in power or not. They are the village property belonging to every resident irrespective of what party one belongs. This kind of act only reveals the arrogance and vengeance.

Similarly, electric polls, garbage cans, schools etc do not belong to any one party. I sincerely hope the party echelon will reflect and reverse the decision.

Nobody is invincible. History has shown many examples. It is a matter of time before one learns the lesson

Even Shirdi Sai baba did not escaped the party colors.

It is a sad situation to witness. History is a great teacher if we open our eyes.

Sri Ganapathy Sachchidananda Swamiji release our book "Sadguru Tattvam-2' on December 11 during Datta Jayanti celebrations. The book contains articles on Guru purnima, Paduja puja, Sri Swamiji, Bhagavad Gita chanting and all the welcome speeches. It is customers for me to welcome Sri Swamiji whenever he visited USA.

After my welcome speech which dealt with healing and meditation music, Sri Swamiji commanded me to publish this book. It also contains about the importance of a guru in one’s life.

This is how the things are shaping up in Andhra Pradesh. Now even the Vijayawada Police is being Christianized. Did this ever happen before?

It reads the chief of police in Vijayawada in inviting everybody to enjoy the meals being offered in December 16. This is an invitation on the half of entire police family.

Did he do it for all Hindu Festivals? Why only Christmas Festival?

It should be condemned by all fair minded people.

On December 13, the high court was petitioned that painting public buildings with party colors are arbitrary and unconstitutional. High court asked the Guntur collector to submit a report in ten days about the cost incurred in painting the buildings and the reasons for painting party colors. Petitioner argued that painting with colors influence the voter.

Times of India published this article on 14th.