05 Feb 2015 Save Temples 438 Views
You are as powerful as the wind;
You are intelligent, illustrious and an inventor.
There is nothing in this world that’s too difficult for you;
Whenever stuck, you are the one who can help.
~Jambavantha, ON Hanuman in the Ramayana in the Ramayana 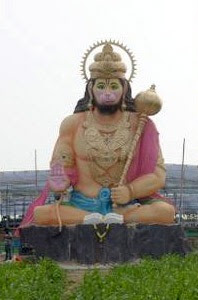 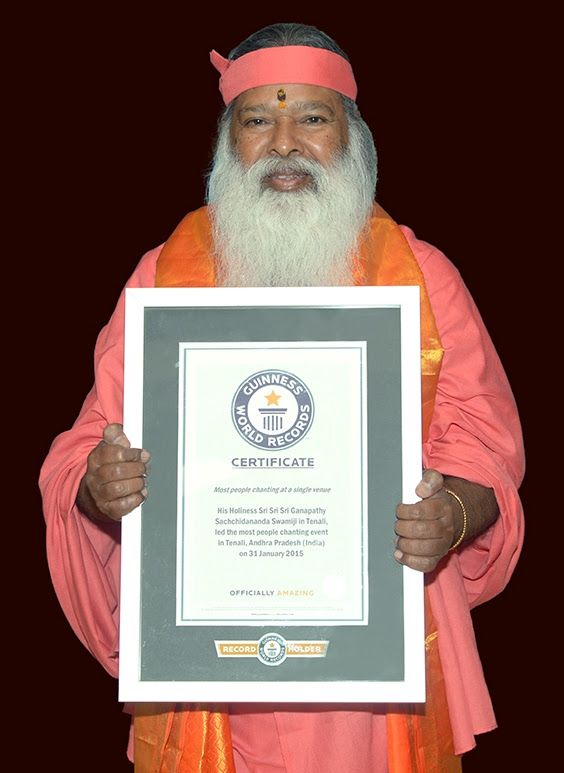 It was amazing, exhilarating, miraculous and very satisfying to see Sri Ganapathy Sachchidananda Swamiji sitting on the specially created sacred stage in front to Lord Rama, Sita Devi, Lakshman and Lord Hanuman chanting and leading more than 2.5 lakh devotes who assembled from more than 30 nearby villages and many people from the rest of the Andhra Pradesh and several devotees from many foreign counties to chant Hanuman Chalisa 27 times on nearly 40 acres of land specially prepared for the occasion in Tenali, Andhra Pradesh.  As an eyewitness to this sacred event, it is exciting, thrilling and elating to see so many people chanting Hanuman Chalisa creating an atmosphere where lakhs of people soaked in the penetrating vibrations and also drenched all the nearby villages with the rain of devotion. 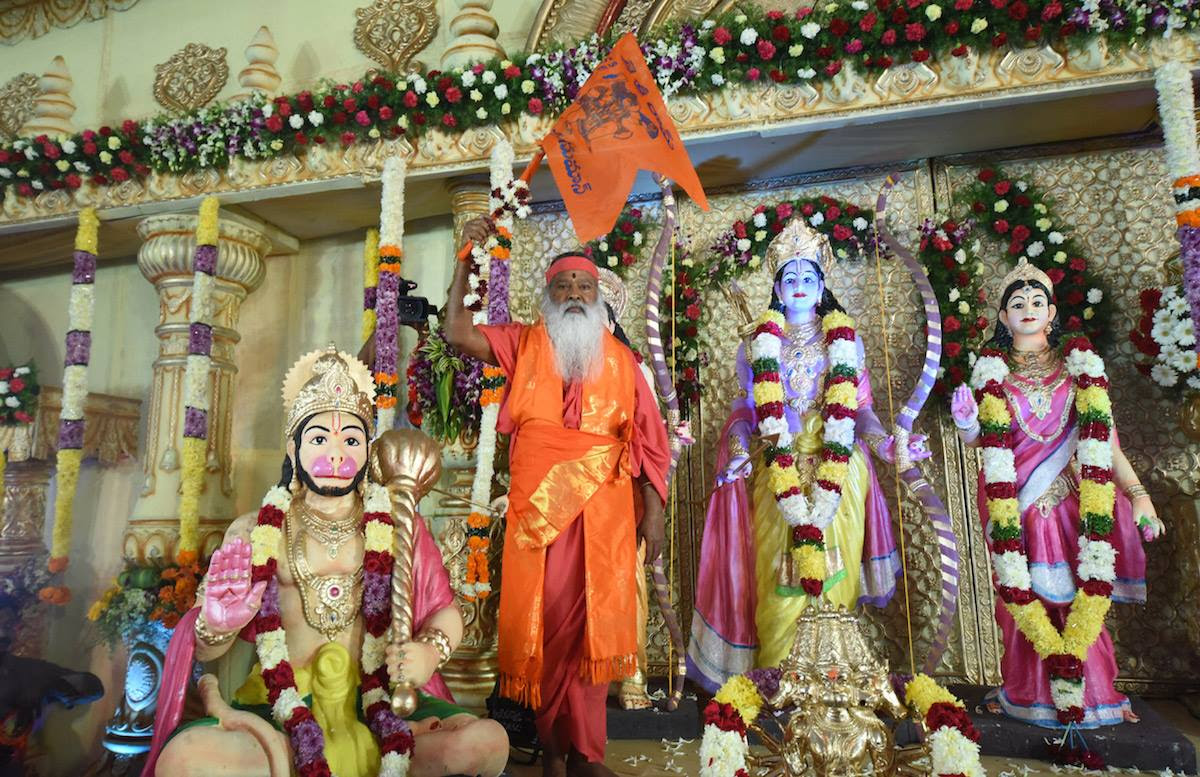 When Sri Swamiji was sitting and chanting Hanuman Chalisa many people saw him as Lord Hanuman as he was totally immersed in the chanting and became one with the source.  More than sixteen pages of guidelines were followed to make sure that the count is accurate and the Guinness World Records would have enough evidence and documentation so that any challenge can be answered with proof. Very strict rules were followed to make sure the account is accurate. They stopped the count by around 10:30 am with a count of nearly 130,000 people and  a Certificate was issued by Guinness World Records through Sri. K. Roasiah, the Governor of Tamil Nadu along with other dignitaries. 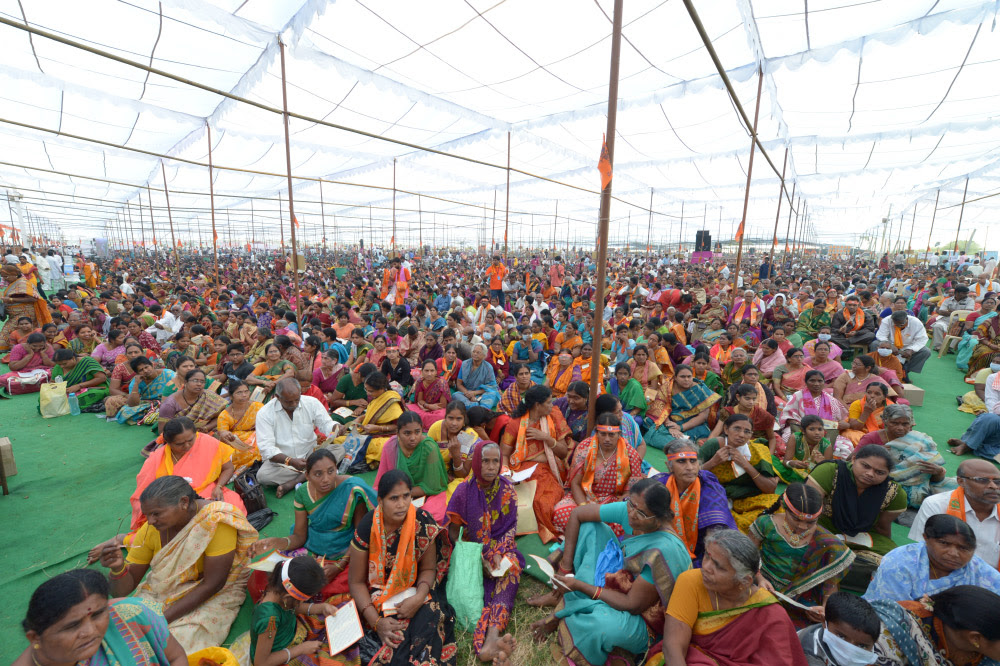 Let us hope and pray Pujya Sri Swamiji to organize similar events across India to make the country pulsate with devotion and revitalize the energies to purify the hearts and soul of the people and also purify Bharat Mata. It is time that all the religious leaders conduct similar or different kind of activities to create the awareness among the people of Bharat about the universal values that embrace the entire cosmos without dividing the people into different categories based on religion, caste, region, language, minority status, and so on. Let Lord Hanuman be the driving force to create harmony and peace on earth. 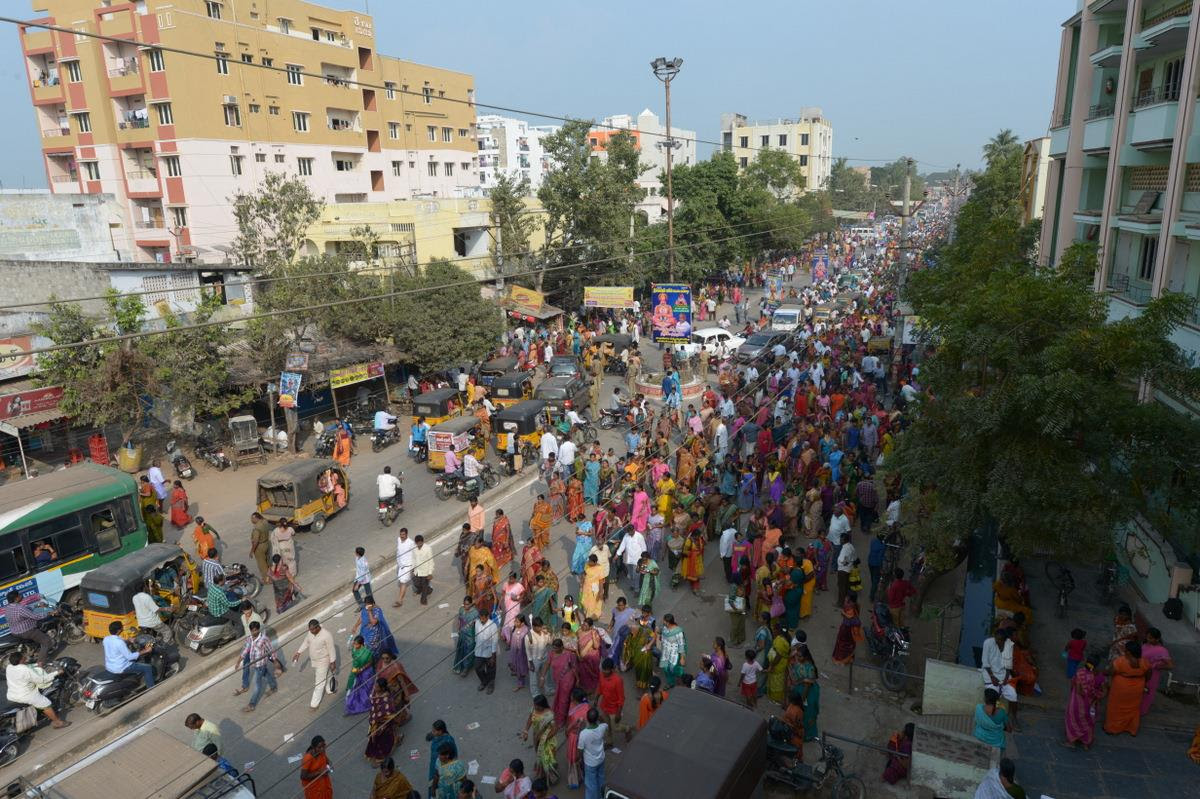 This is the kind of event that makes all Hindu proud of their ancient, rich and ageless culture as it is the only faith that has taught the principles of tolerance, ahimsa, inclusiveness, nishkama karma, stithipragna, meditation, yoga, morals, ethics, harmony and many such virtues.  Let us pray Lord Hanuman to revive the our Hindu heritage by establishing Rama Rajya where high morals are practiced, where people’s needs are met, where peace and tranquility prevails, where individual selfishness is subjugated to the service of Bharata Mata, where vasudaiva kutumbamprinciples overcome the egoism and pride, where gurus provide the needed spiritual guidance to the rulers instead of secular principles, all panchabutas are respected rather than exploited, and where all animals are provided sanctuaries instead of slaughterhouses. Guinness Records Recognizes Sri Swamiji for Hanuman Chalisa 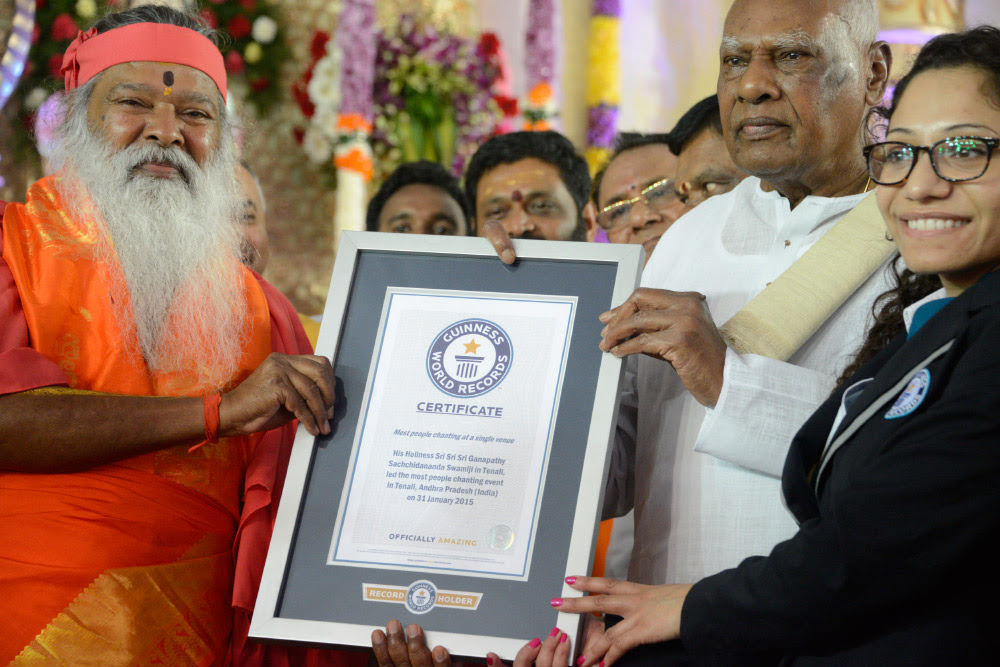 A four-hour marathon mass chanting session led by His Holiness Dr. Sri Ganapathy Sachchidananda Swamiji, on 31st January 2015 in Tenali in the State of Andhra Pradesh, India, was recognized by the “Guinness World Records.”
The chanting of “Hanuman Chalisa,” attended by 128,918 (One hundred and twenty eight thousand nine hundred and eighteen) people from various parts of the world was the largest gathering ever to chant at a single venue in recorded world history. Leading, inspiring, and participating in the effort, Sri Swamiji clearly explained the merits of the chant, and the virtues of repeat chanting ahead of each chant.  The 9th chant was recognized as the Guinness World Record attempt by the official adjudicator Ms. Fortuna Burke, who adjudicated the event. 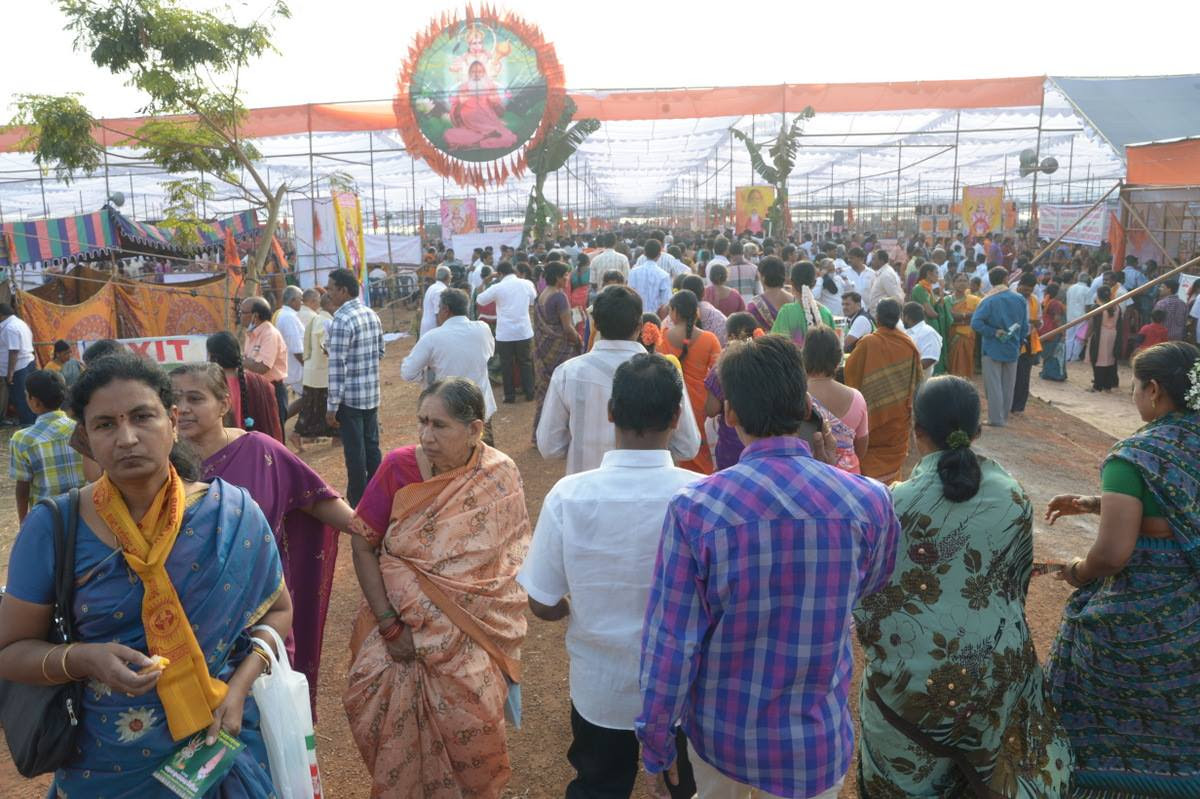 With the chant continuing for a little over six minutes, Ms. Burke announced it as “the brand new world record in the category of the most people chanting from a single location,” with 128,918 participants singing in unison.  During the 27th and last chant, there were over 226,000 participants as per the estimates.
Witnessing the event with great interest, the Governor of Tamil Nadu His Excellency Sri K Rosaiah, later presented the Record Certificate from Guinness World Records to Sri Swamiji.  Speaking on the occasion, the Governor expressed his utmost happiness and praised the large gathering of people who turned out from different parts of the world.
The Hanuman Chalisa – authored by Sant Tulasidasji Maharaj – consists of 40 verses, and is well known around the world, especially since it is supposed to fulfill the desires of those who recite it.  According to Sri Swamiji, “Hanuman Chalisa is a very ancient prayer dating back over 400 years.” 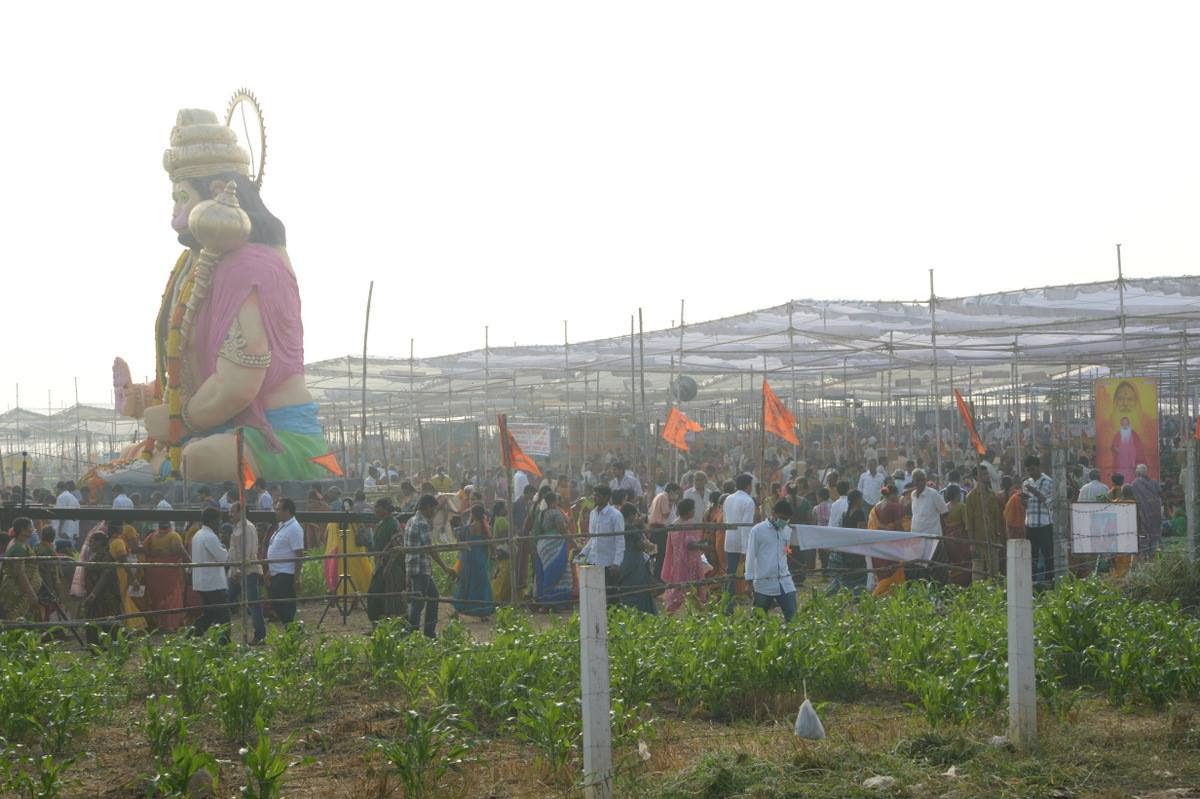 This particular prayer is especially chosen for chanting since the collective sound vibrations will create positive impact thereby promoting universal brotherhood, and aiding in the well-being of the entire universe.”  In recent times, there has been scientific evidence showing that sound waves formed while chanting are converted into electro-magnetic waves and provide enormous positive impact on beings and atmosphere.
Prior to the event day, elaborate arrangements were in place in anticipation of Sri Swamiji’s arrival at the event venue in Tenali. On the event day, a large number of people started thronging the venue from 4 AM onwards with slogans of Jai Sri Ram and Jaya Guru Datta.  After performing Purnahuti to Manyu Homa and Maha Mangala Arati to Hanumad Vratam, Sri Swamiji started the chanting session along with his Celestial Message troupe thereby capturing the complete attention of those who were present. 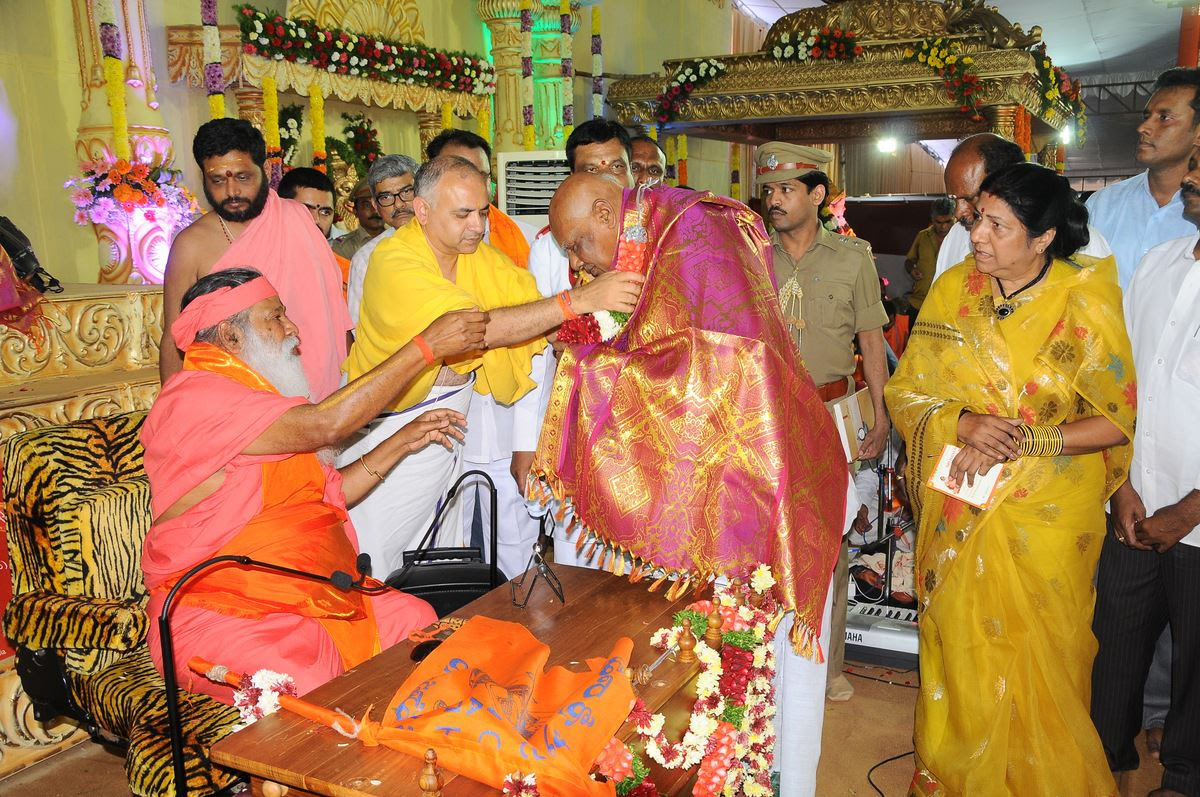 The event was organized by Sri Varadarajulu from Sri Hanuman Seva Samithi and supported by Sri Ramesh Krishna, a representative of Avadhoota Datta Peetham.  A large number of media persons and local political representatives were also present at the event.

More information can be found at

Fund Raising Program in NJ to Save Temples

[GHHF] Response to Petition against Dr. Subramanian Swamy's Superb article on How to Wipe out Islamic Terrorism